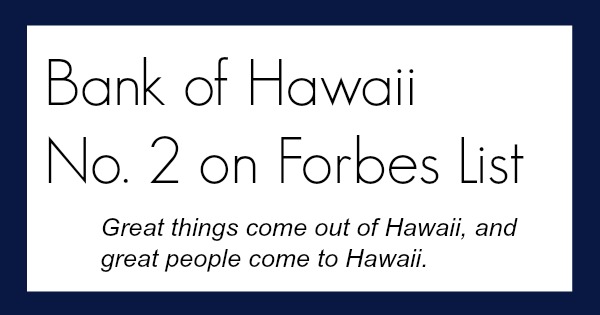 There’s a funny little trend among some who live on the U.S. Mainland, and it involves not taking Hawaii very seriously. Specifically, this tends to apply to business. There are those who just assume that nothing serious is going on here, and that laying on the beach takes up the majority of our time as Hawaii residents. Some prospective Maui home owners who are contemplating a move have run into this attitude among friends, family, co-workers, etc. That’s why it brings a smile to a lot of faces here in Hawaii when our businesses trounce their competitors all over the nation.

Case on point: Forbes just announced Bank of Hawaii as the nation’s second-best publicly traded bank in its 2015 list of Best and Worst Banks in America. That’s three places higher on the list than they had in 2014. Alright, so they didn’t make No. 1, but being the second best bank in the United States should inspire respect among those who were previously unfamiliar with its excellence.

The success of Bank of America has been attributed to its conservative underwriting strategy during the housing bubble, among other things. This speaks volumes about the stability of the economy as it relates to Hawaii real estate. It pays to be careful. Not surprisingly, the bank also had the best return on equity among all the others on the list, with 15.5 percent over the past 12 months. With a total of $15 billion in assets, the bank is being ranked against competitors as large as JPMorgan Chase with $2.5 trillion in assets and as small as BancFirst with $6.4 billion in assets. The list was made with data from SNL Financial, which calculated asset quality, capital adequacy and profitability.

This kind of outstanding business performance isn’t all that unusual here in Hawaii either, if you were thinking Bank of Hawaii was the only one. Hawaiian Airlines is also the most on-time airline in the nation, with impressive consistency and high performance in other categories as well. If you’re interested in smaller businesses, some of the best restaurants in the nation are located in Hawaii, including Mama’s Fish House, which is located here on Maui in the charming beach town of Paia. Some might say it’s tricky to do business in Hawaii, but that might explain why the ones that are successful here rise to the top nationally.

Let’s hope the other banks throughout the U.S. learn something from the way Bank of Hawaii is managed. It’ll be good for the country in the long run, and the real estate market. On that note, if you need assistance finding the right Maui home or condo to meet your needs, you’ll find our contact information at the bottom of the page. Mahalo for reading this week!