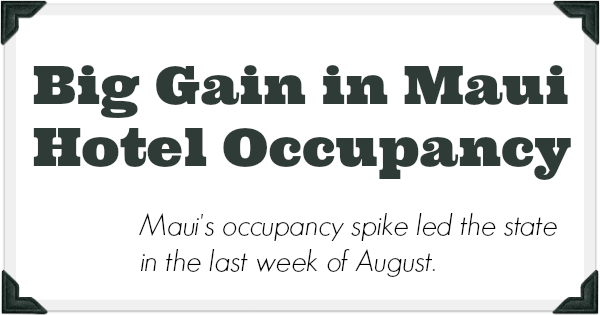 Hawaii hotel occupancy was up 2.5 percent in the last week of August, according to a report by Hospitality Advisors LLC and STR Inc. What’s interesting about it is that the gain was largely attributed to Maui’s 8 percent spike in occupancy, which was a higher increase than the neighboring islands earned. Why does this matter to us as South Maui real estate specialists? The state’s primary economic driver is the visitor industry, and its performance shapes Maui lifestyles in many ways. Also, if you’re not familiar with the island, South Maui is a major vacation destination, and visitors become buyers all the time!

Although the 8 percent occupancy spike is specific to one particular week in August, it’s still promising. The official strategy for Maui’s visitor industry is to attract fewer guests who pay more, rather than the reverse. Maui hotel room rates are higher than the other islands, and occupancy tends to be lower. That’s why Maui is generally considered a more exclusive vacation destination than the other islands.

The fact that Maui’s occupancy made such a big jump that week was impressive considering the high hotel room rates, which also increased by 1.4 to $271.60 per night that week. The occupancy gain says a lot about the economy, based on how much vacationers can spend now compared to the recession. Just as luxury real estate sales fell in the recession, so did luxury vacation stays, but as we see them climb, it’s a clear indicator of better economic conditions. That’s why Maui’s performance is so important.

The average statewide hotel room rate in the last week of August was $231.78, and occupancy was at 77.7 percent. Compare that to Maui’s $271.60 rate with an occupancy that increased 7.7 percent to 73.9 percent. If you’re wondering, these gains are calculated based on a comparison with the same week last year.

If you love South Maui, whether you live on the island or you discovered the area on vacation, we’d be happy to assist you in finding the right property to meet your needs. If you need us, you’ll find our contact information at the bottom of the page. Mahalo!

← Prev: Hawaii Foreclosures Down in July Next: Grand Wailea Renovation →