Hawaii is the Healthiest State Again 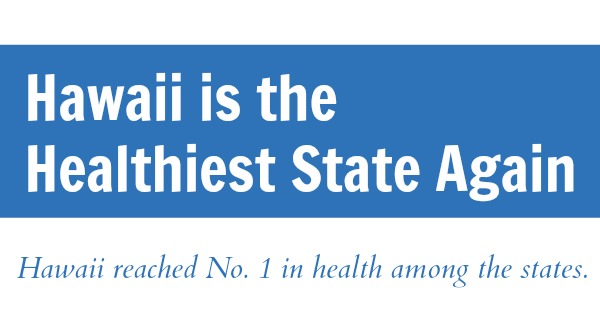 If you needed one more reason to buy Maui real estate and move here permanently, Hawaii topped the United Health Foundation’s list of healthiest states this year. That’s the second year in a row that we’ve earned that distinction. If people question your decision to move here, you can just tell them it’s a health decision!

The 2014 America’s Health Rankings had Hawaii in the top six states throughout the past 25 years since the list’s inception. It’s nice to be at the very top again this year. So what makes Hawaii such a healthy place to live?

The report indicated low obesity in Hawaii, which is no surprise, considering how easy it is to get outside and have an active lifestyle. When it came to preventable hospitalizations, we had the lowest rate in the nation, and we also had a low rate of cancer deaths. If cancer is caused by chemicals in the environment, our rank is no surprise. It can’t hurt that we’re sitting in the middle of the breezy Pacific where air pollution can’t settle. Hawaii’s air pollution sources aren’t very substantial either, aside from whatever comes out of the Big Island volcanic activity. But the benefits of Hawaii’s health aren’t just about the environment. We also have a low rate of uninsured and strong collaboration between the private sector and the Department of Health.

Every state has areas it can work on, when it comes to health, however. The areas where Hawaii could improve are binge drinking, high incidence of infectious disease, and low immunization coverage among children. As it affects you, this only boils down to making your own smart decisions, and driving carefully at night when there could be people on the roads who are under the influence. Again, as No. 1 in the nation, even these issues aren’t as extreme as other places.

The report outlined some areas where Hawaii has been improving as well. Smoking is on the decline, and so is the number of children in poverty. Binge drinking may be an issue, as mentioned above, but that’s on the decline too.

If living a healthy life is an important factor in your decision to buy a home somewhere, we hope you’ll choose Hawaii. Of course you will have other factors to consider, but what’s more important than health? If you don’t have that, you don’t have anything, as they say. On that note, if you need assistance finding the right Maui property for your unique preferences and needs, you’ll find our contact information at the bottom of the page. Mahalo for reading this week!

← Prev: Hawaii Visitor Spending on Target for Record Year Next: Bank of Hawaii No. 2 on Forbes List →