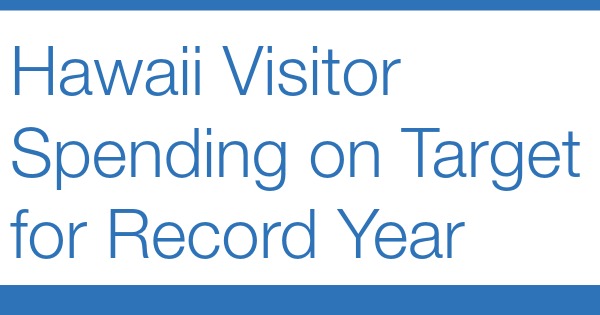 Based on October statistics, Hawaii is on target for a record year in visitor expenditures, according to the Hawaii Tourism Authority (HTA).  Arrivals were up 3 percent to 659,821 visitors and expenditures were up 2.2 percent to $1.14 million, compared to October of last year.

That data brings us up to a year-to-date increase of 0.7 percent in arrivals for a total of 6,879,749 and 2.2 percent increase in expenditures for a total of $12.2 billion. Growth is continuing, but slowing down after the initial recovery from the recession.

It’s no surprise that Hawaii real estate is appreciating so quickly. The visitor industry has had a profoundly positive effect on the economy. In fact, according to the report, $1.3 billion in tax revenue has been generated in the first ten months of the year, which is $27 million more than the same period last year.

The HTA expects changes in the booking pace during the second quarter of 2015 because of the strengthening of the dollar against international currencies. This very factor explains why arrivals from the domestic market grew by 5.2 percent in October. Both the East and West coasts saw some growth, while international markets like Japan and Canada saw a slight drop.

Maui itself had a 6.9 percent gain in arrivals in October, and so far, we’re at a 0.8 percent gain for the year. The next two months will tell how well the visitor industry performs here overall. Expenditures is where Maui leads. We saw an October increase of 10.1 percent and a year-to-date increase of 11.4 percent. The latter figure is the most dramatic gain of all the islands.

Like a Maui vacation, Maui real estate tends to be expensive, but the principle behind this is that you get what you pay for. After all, it’s an iconic island, and for a good reason. But you’ll have to visit to understand why, and to decide for yourself if there’s anywhere else you’d rather live. If you need assistance, you’ll find our contact information at the bottom of the page, as always. Mahalo!