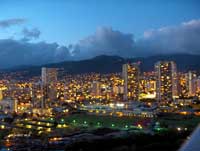 According to the Brookings Institution’s MetroMonitor report, Honolulu was in the top twenty strongest-performing metropolitan areas in this year’s second quarter.

The GMP is based on total value of goods and services produced within a metro area.

Honolulu’s presence in the top twenty is a very reassuring sign. Honolulu’s job loss rate slowed between the first and second quarters. Unemployment was at 2.7 percent in June compared to June 2008 which ranked Honolulu at number 18.  Employment was off by 2.5 percent, putting Honolulu at number 26. The GMP dropped 1.5 percent from its peak, putting it at rank number 9. Housing was the real rough area with prices down by 3.6 percent ranking at 64th.

As for Maui real estate, we recommend that you browse the Wailea Fairway Villas for some lovely homes, or perhaps the homes for sale in Maalaea. If you have any questions or would like to contact us, you can call (866) 874-1942 toll free or Lisa’s cell at (808) 283-7426. You can also email mark@realestatemauihawaii.com or lisa@realestatemauihawaii.com.