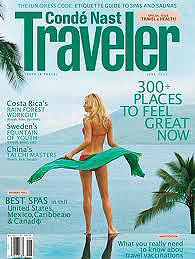 Maui is always receiving accolades as a vacation destination. Whether the spotlight is on Maui’s activities, golf courses, tennis courts or the fact that it is an all around favorite destination, the awards and distinctions just seem to come one after the other.

The latest news is that Conde Nast Traveler magazine’s top Hawaii resort spas list for 2011 included two Maui spas that tied for first place, along with one on the Big Island.

How were the winners decided? The 2010 Readers’ Choice Survey, including almost 25,000 participants, ranked the spas based on their facilities, treatments, staff, and overall score out of 100. There were several categories in this poll, and those were spas on the Mainland, in Canada, in Hawaii, in Mexico, in Central America, the Atlantic, the Caribbean, and on cruise ships.

Twenty Hawaii spas came up in the survey, and the top three mentioned above all scored at 95.4 out of 100. What are the chances of three of them tying at that level of granularity? Aside from the top ranking winners, the Grand Wailea and the Halekulani in Waikiki tied for fourth with 95.2. Apparently there wasn’t much diversity among the scores because the average for the top twenty was 90.56.

Not only did two Maui spas tie for first and one tie for fourth, but Maui had the most spas in the survey with seven. The number of Oahu spas represented were fewer than on the Big Island. Oahu had five and the Big Island had six. Kauai and Lanai each had one.

The results of this poll tell us two things. First, that Maui continues to be viewed popularly as an excellent vacation destination, and second, that a large number of people have already visited Maui and were happy enough with their experience to rave about it!

Plenty of our residents were once visitors, so you never know who is going to step off a plane and decide to live here permanently. If you happen to be one of those people, and you’d like to buy a Maui home, you’ll find our contact information at the bottom of the page. We’d love to assist you. In the meantime, feel free to browse our South Maui home listings, or use our Maui real estate search tool if you have a specific criteria already in mind. Mahalo!