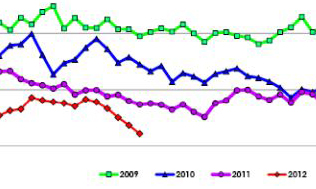 According to the state Department of Labor & Industrial Relations, Maui’s unemployment rate in October was down 2 percentage points from the same month last year to 5.5 percent.

As for the state, the seasonally adjusted jobless rate was also 5.5 percent. That’s down from 5.7 percent in September. According to data analysts, unemployment hasn’t been that low in Hawaii since November of 2008.

This is good news for those considering a move to Maui. Many are concerned about finding work here, but the seasonally adjusted unemployment for the nation on average was 7.9 percent in October. This proves that Maui’s unemployment rate is below the national average.

If you’ve been reading news reports and aren’t too familiar with Hawaii, don’t be confused by Maui versus Maui County. Maui County includes Maui, Molokai and Lanai. For Maui County, unemployment was 5.7 percent, which was still down from 6 percent in September and 7.7 percent in October of last year. The reason the number is slightly higher is because Molokai’s unemployment rate was at 14 percent, which was still better than last month and October of last year. Molokai’s population is small compared to Maui’s, which is why it didn’t change the County average too much. It also helped that Lanai’s unemployment rate was only 1.3 percent.

An addition to the good news is that 11,900 jobs were added to the workforce in Hawaii since June. Leisure and hospitality contributed 800 jobs to that number, while professional and business services contributed 600 jobs. The construction, trade, transportation and utilities sectors rose by 300 jobs each.

It’s really great to hear all these tidbits of news about economic improvements for the island and the state as a whole. If all goes well, hopefully these factors will continue to help Maui real estate recover. Mahalo for reading this week!