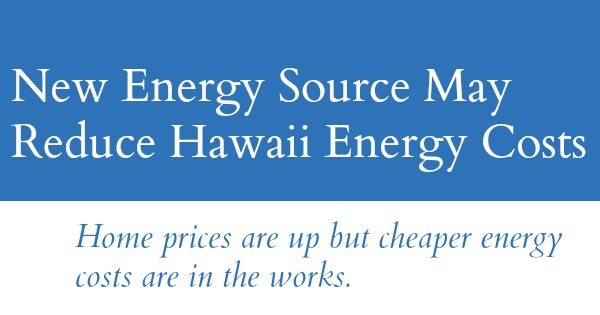 While Hawaii real estate prices have been named the second highest in the country, with Massachusetts ranking first, there has been a steady stream of encouraging news when it comes to the cost of energy in our beautiful state. Yes, real estate inventory is low and prices are high, thanks to demand, but solar and wind energy are strong renewable energy sources, which comprise more and more of the overall share of energy used in our state. According to recent news, gas prices are seeing a significant drop, at least for the time being. Now, there is a natural gas deal in the works with the potential to save Hawaii tens of billions of dollars over the next twenty years.

SeaOne Maritime Corp. has developed a compressed gas liquid, or CGL, system, which they state is 50 percent cheaper than other conventional energy sources such as oil and liquefied natural gas, or LNG. Their new patented technology has been in the works for the past decade, and their process includes conditioning, liquefying, transporting and delivering their fully produced gas stream from the field to its markets. Their sources come from stranded and remote reserves.

SeaOne considers Hawaii to make the most sense as a market for their CGL product because of the strong push for more affordable energy sources. It’s likely that they’ll make more of a profit supplying Hawaii than other states because of the normal cost of energy here, but if their product can make our energy cheaper in the process, and it is environmentally sound, then it will be a mutually beneficial arrangement.

Although there are many promising qualities to CGL, it hasn’t been deployed yet, and new technologies and products generally come with kinks to be worked out, or at least adjustments to accommodate them. SeaOne advisor Michael Dee has been meeting with state legislators, regulators, businesses, and industry stakeholders to educate them about CGL. He has pointed out that liquefied natural gas is not the lowest cost option.

Expect to hear more about CGL in energy news in the future, because it took a lot of investment to come this far, which makes it all the more likely to be implemented under the guidance of SeaOne Maritime. Hopefully, it will prove to be a success, and save Hawaii home owners and residents as much money as they plan.